Yarn bombing has become a very popular form of street art that unlike graffiti can be removed with out any damage to the place it is inhabiting. So what is a yarn bomb?

Think of it as a big explosion of yarn placed over nature or a man made objects. To really get a feel for what yarn bombing was and how other where creating it I started looking through Instagram a can across a guy going by the name of Yarn bomber, who I later found out was named Steve Duneier. I quickly learned that he was in the middle of a wonderful project with the goal of getting people to go out side and play and to turn a very negative hiking trail into a fabulous world of color in the city of Santa Barbara California.

Steve  had posted a picture with the caption saying if you would like to be a part of my installation create a piece using knitting or crochet and send it to my office in Santa Barbara, California by the end of March and I will add your creation to the installation. The second I read this I had ideas pouring through my head of what I could create so I could be a part of this amazing idea!

The next weekend I was teaching a crochet lesson to one of my long time students and I mentioned the idea to her, she instantly wanted to help too! So we came up with the idea that I would take a picture of a Colorado scenery and knit it in 4 panels and sew them together and we would make each panel represent a different season since we get all 4 seasons living in Colorado. Then we would crochet details to make the piece  3D. 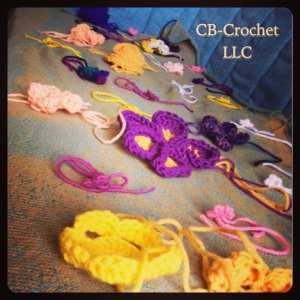 To save me money I had to use cheap yarn that I already had which in turn made it very difficult to see the background picture but the 3D details stood out which was just fine with us. To make the piece even more recognizable I added a panel with our names and the words Colorado! And off to California it went!

In the mean time I decided I wanted to try a mini yarn bomb in my own neighborhood. I decided that the shop I have my studio in needed a little loving to one of its outdoor pilers. So I turned it into a tree! It was fun to try something different and to use my knitting machine to knit the leaves. Creating a new shape on the knitting machine was a new thing for me and lots of fun. 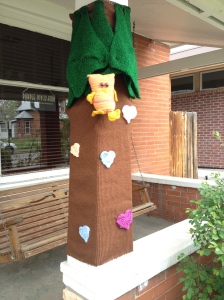 I could not stop there though. After learning when the yarn bomb in Santa Barbara was going to be installed my student and I really wanted to go and see it in person. So that exactly what we did!

As we where hiking up the trail to where the installation was we ran into a lot of boulders covered in graffiti. It was such a sad sight to see. We now understood what Steve was talking about when he said he wanted to take back the trail. When we got to the top of the trail we were amazed at all the wonderful yarn coved boulders we saw, and to our surprise Steve was there too!

We got to meet Steve and hear about his experience in creating the wonderful masterpiece we were looking at. He told us that the response he got form the community was overwhelming. He ended up having people from all 50 United States send pieces, and 36 different countries! Steve took everyone contribution and stitched them all together to create one-of-a-kind art like I have never seen before. Everywhere you looked there was colors and amazing stitch work. I was in heaven! It was truly a once in a life time experience and the pictures I took will never do it justice. I am so very grateful for the experience.